My Ten Predictions for 2010 (www.investerwalk.com)

My Ten Predictions for 2010


I have been making my 10 predictions for 2 years now, since 2008. I initially got this idea from Byron Wien who has been publishing them every year since the 1980s, when he was with Morgan Stanley, then Pequot Capital , and now with Blackstone. My first picks for 2008 were accurate and had anticipated almost all major trends, substantially better than Byron's - something I called beginner's luck. For 2009, Byron beat me with his correct predictions. In this crystal ball reading business, no one wins them all. Nevertheless, I think it is a fun thing to do, especially when the right calls are made. I intend to continue my predictions every year, whether or not I get most of them right or wrong the year before. Without further delay, please find my ten predictions for 2010 below. 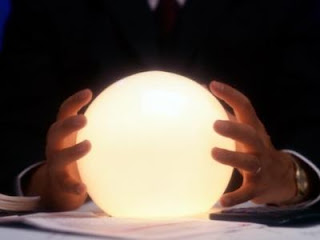 1. Gold touches $1,500 per oz. in 2010, representing about a 50% gain from the current level. Silver goes up in sympathy, reaching $25 per oz. HUI passes $600 with many junior gold/silver miners doubling and tripling. Gold would be treated as the only solid asset sought by both ordinary people and foreign central banks with further deterioration of fiat money.

2. US dollar index goes to 60. The current US dollar rebound is likely short-lived. After briefly touching 80, in order to squeeze and scare enough shorts, the US dollar index continues its downward trend for the majority of 2010 until it touches 60. Most of the foreign central banks don't want to hold US dollars anymore, but they have difficulty getting out of this situation without substantially hurting themselves. The best way for both sides (foreign central banks and the US Fed) is to have a steady and orderly decline, around 20% per year.

3. The current bear market rebound of the S&P 500 will continue to rally for about another 7 months, from January to July, in 2010. Then the market will face another over the cliff scary 2nd leg down from August until year end. This is contradictory to the usual pattern of a mid-term election year in which we usually see a difficult 1st half then a better 2nd half. But this is consistent with current Wall St. thinking and behavior of squeezing more juice and bonuses for itself as long as it can, before the 2nd dip of economic depression kicks in for the general public.

4. Citigroup goes below $2 again. The current difficulty of raising capital by Citi says much about the dire situation of this firm. This is a horrible PR disaster for Citi and bad decision making by Citi management, since now everyone in the world knows that the only purpose of paying back the TARP money was to pay Citi's fat cat management fat bonuses. Citi's portfolio, in the hundreds of billions, is still greatly exposed to further deterioration in both the residential and commercial real estate markets. Just the potential meltdown on the commercial mortgages and derivatives in its portfolio would wipe out its tiny owners' equities quickly. Maybe at that time, they will apply for TARP money again (of course, after pocketing their bonuses?)

5. The ten-year U.S. Treasury yield doubles from about 1.5% currently to 3%. This could be a big surprise for both the Fed and investors. The Fed can only control the short term rate and the debt market smells and senses something is going very wrong with both the US dollar and US debt - a dumping process quickly kicks in. In addition, deflation worries switch to inflation worries, not typical inflation but monetary hyperinflation already happening. A continuously falling US dollar, out of control money supply, and limitless increases in government deficits let investors see no light at the end of the tunnel. This is going to be worse than the last decade of Japan since the whole fairness of our system is under question by saving the few its riches at the expense of the US general public.

6. The current rebound of the S&P/Case-Schiller Index is short-lived. The Schiller Index will drop more than 15% in 2010, below 120. Residential real estate faces tremendous pressure due to growing ARM resets from 2010 to 2012. The real estate crash spreads into commercial properties, and large scale commercial development projects fail left and right next year, like fireworks in the sky. The worst news is that both the residential and commercial real estate markets will look to take at least a decade or two to recover, thanks to Wall St.'s financial engineering for over a decade.

7. After buying time for another half year, the private equity (PE) industry continues to face pressure in 2010, especially in the 2nd half. The leverage they implemented amplifies their losses and PE investors demand more transparency on the real value of their investments. They finally realize this leveraged business model doesn't work, which is basically leveraging tiny returns in order to earn lucrative fees for the owners of PE firms. It is either they win or you lose. More hedge funds close down their shops in 2010, after the 2nd economic dip, since they realize they will never get back to their high-watermark to start earning their lucrative fees again.

8. China continues to grow about 9% in 2010, after 9% in 2009. China's efforts to encourage its consumers to spend more and save less (which is what we have done here for more than 2 decades) continue, and the central government starts catching on and beefing up social security programs, which further benefits certain industries like healthcare. This shift is behind the continuing strength in the economy. The biggest headache for the Chinese government is how to deal with 80% of its foreign reserves being in some kind of US dollar-denominated instruments, facing further depreciation and value reduction.

9. Inflation reaches 10% based on pre-Clinton era CPI, benchmarked by www.shadowstats.com (Disclaimer: I have no affiliation with shadowstats.com, and I am not responsible for the content of such site.) In order to compare apples to apples with the 1970s, it makes sense to return to the same formula of the pre-Clinton era for the CPI calculation. Once inflation is out of its cage, as I believe it will be in 2010, it is impossible to tame it without dramatic measures as Paul Volcker did in the 1980s.

10. Oil touches 3 digits ($100) again in 2010. The current oil price of around $70 limits supply since most tar sand oil producers are not much better than at breakeven. Nuclear energy would receive its deserved attention when the uranium supply from the former Soviet Union is getting close to its end. Most of the green technologies are more hype and scam than reality. The threat of global warming is also greatly exaggerated by the politicians and media. People still remember in the 1970s, everyone was told by the politicians and media that the earth temperature was dropping and mankind was back to the ice age. Only 3 decades later, we are told the opposite. The reality is that human beings don't have control and can't do anything about the earth's temperature either cold or warm, up or down. It is just another example of hypocrisy and political correctness at work, wasting tons of money along the way.